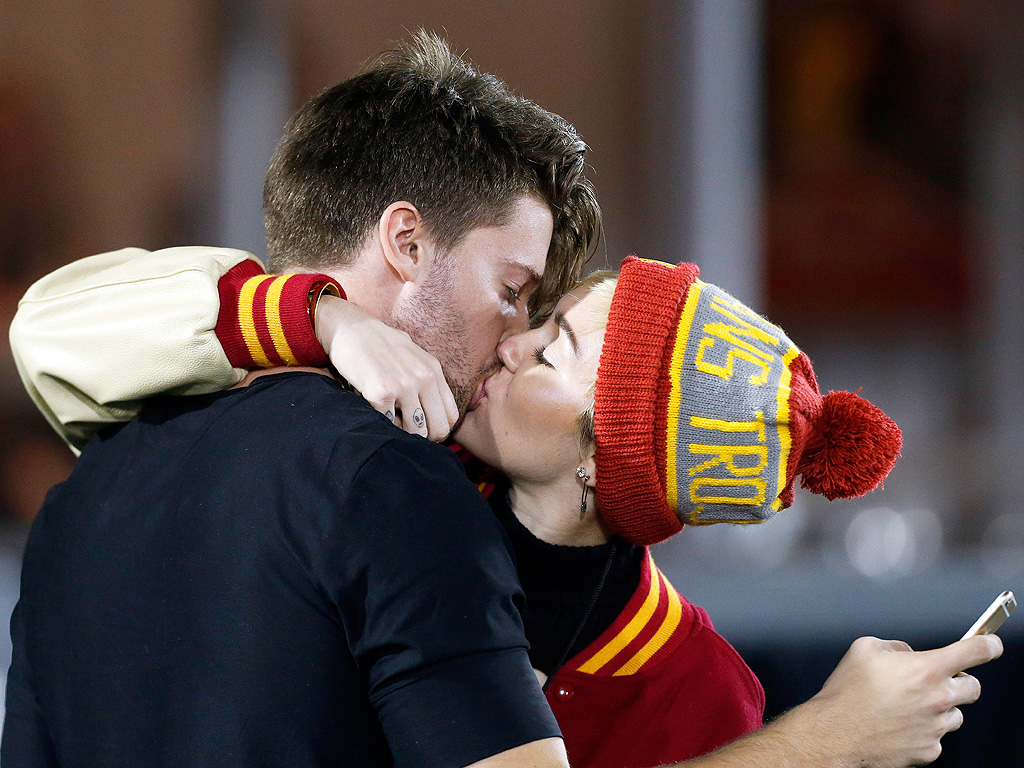 Maria Shriver displeased with her son’s social life? Not so fast.

While recent Internet reports claim Maria Shriver is up in arms that her 21-year-old son Patrick Schwarzenegger is dating pop star Miley Cyrus, there’s no such family drama brewing, PEOPLE has learned.

“It’s untrue that Maria is unhappy,” says a source.

While Shriver, 59, is a hands-on parent to Schwarzenegger and her three other children with Arnold Schwarzenegger, 67 – Katherine, 24, Christina, 23, and Christopher, 17 – she trusts their choices.

Cyrus, who has spent time with Shriver and gotten to know the rest of the family, is no shrinking violet, of course.

At her 22nd birthday bash on Nov. 23 at Metropolitan Nightclub in West Hollywood, for instance, the Wrecking Ball singer donned a neon pink and lime green cut-out dress and vamped with blow-up dolls.

But holding his own and by her side all night? Schwarzenegger, dressed in a pilot’s jumpsuit for the Happyland-themed party. “They were cute and affectionate together,” an onlooker tells PEOPLE.

The feeling, echoes a Cyrus pal, is mutual: “They’re having a great time.”

While major artists including Julian Schnabel and Marina Abramovic will be in Miami this upcoming week for Art Basel, starting Dec. 4, there will also be no shortage of pop culture icons on hand — including Miley Cyrus and Kim Kardashian, who is celebrating that infamous, oiled-up Paper magazine cover.

A total of 267 galleries from 31 countries are set to descend on the main fair at the Miami Beach Convention Center until Dec. 7.

The world’s top collectors, curators and gallerists will mingle at dinners, including one thrown by Larry Gagosian for renowned American architect Peter Marino, whose exhibition “One Way: Peter Marino” opens at the Bass Museum of Art on Dec. 4.

Other exclusive dinners include a fete for the high-end Faena development thrown by Len Blavatnik and Alan Faena with Baz Luhrmann, a dinner for the top artists, collectors and gallerists hosted by Aby Rosen and Samantha Boardman, a Roger Dubuis and Peter Brant-hosted event, plus another hosted by IWC and Peter Lindbergh.

Ian Schrager will unveil his much-anticipated Miami Beach Edition hotel, while Tommy Hilfiger will welcome guests to his Raleigh Hotel with a performance by Cyrus on Thursday, the same night Kim K will celebrate her Paper cover with a sitdown VIP dinner.

And Theophilus London will DJ at the Artsy party in the Design District on Dec 3. This year’s show, and the satellite fairs including Design Miami, Select and Nada, are surrounded by so many events its impossible to list them at once — so watch this space for more updates.

It may be Thanksgiving break for many college students.

But when it comes to Patrick Schwarzenegger and Miley Cyrus’ relationship, let’s just say the lovefest is unstoppable.

Although the two spent Turkey Day with their respective families, Hollywood’s newest couple reunited Saturday in Malibu, Calif., where sparks were clearly visible.

The couple started their afternoon with a walk on the Malibu Pier before walking into Nobu restaurant hand-in-hand.
Cyrus was all smiles as she wore a long black skirt, white T-shirt and a comfy pair of Converse shoes. In comparison, Schwarzenegger opted for a black T-shirt, dark green trousers and black shoes.

Their public outing comes nearly two weeks after the twosome was spotted making out at the University of Southern California football game in Los Angeles.

Although the pair decided to skip Saturday’s match vs. Notre Dame, the university took full advantage of the couple’s visit by setting up a special merchandise display in the bookstore that featured the same jacket and beanie cap designs worn by Cyrus.

As it turns out, the idea was pretty genius because the beanies disappeared within days.

“The bookstore said they were completely sold out after Saturday’s game,” a source told E! News after trying to purchase the warm accessory. “They said they also had tons of calls but more won’t be coming until after Christmas!”

While fans continue to show their support for the couple, one thing remains clear: These two are falling in love.

“I have seen Miley with Liam and other boyfriends but honestly I have never seen her look as loved up as this,” an insider recently told E! News. “This is more than just a fling.”

And don’t think for one second that this is a one-sided relationship. Schwarzenegger also can’t get enough of his leading lady.

“Patrick loves what an amazing heart she has and that she really pushed him out of his comfort zone,” a source revealed. “They might seem like an odd pairing, but they are quite good for each other. They’ve been friends forever.”


December 18th, 2014 / 0 comments / Craig
Demi Lovato On Former-Friend Miley: “I Don’t Have Anything In Common With Her”
Uncategorised

During a radio interview with 103.3 AMP Radio’s “The TJ Show,” a fan called in and asked Lovato about the status of her friendship with Cyrus. “Um… yeah… that, um…we’re, we’re like, we’re acquaintances,” Lovato said.

The DJ asked if there was a specific drama that caused the rift. The fan clarified that, no, she wasn’t wondering about anything specific, only that she had noticed Lovato and Cyrus hadn’t seemed as close as they once were following Cyrus’ “wild phase.” Then Lovato chimed in: “It’s life, and people change, and, you know, I don’t have anything in common with her anymore. I wish her all the best.”

Lovato and Cyrus are long rumored to have suffered some kind of rupture in their friendship. Earlier this year, the two unfollowed each other on Twitter, which, in 2014, is the equivalent of drunkenly yelling “I never want to talk to you again, you backstabber!” while stumbling out of a bar at 3:30 a.m.

You can listen to the entire interview here. The Cyrus question comes up at the 4:25 mark.

The pop star celebrated with new boyfriend Patrick Schwarzenegger, 21, and several friends at a West Hollywood nightclub, where she was presented with an enormous pizza cake and rode a mechanical ride in the form of a penis.

Miley, who had used giant inflatable phalluses on stage during her Bangerz tour concerts, arrived at her party in a colorful outfit, consisting of a bright pink top that connected with a ring to her fluorescent green mini skirt, covered with a pink and yellow fur jacket. She sported blue eye shadow, blue and yellow hearts painted on her face and pink and blue butterfly clips in her short hair.

She was photographed near the Factory Club with Patrick (dressed in an olive green flight suit), her brother Braison Cyrus, 20 (dressed in plaid), and friends. Singer and actress Sky Ferreria also attended the party, E! News has learned.

Cyrus posted a photo on Instagram of her pizza cake.

“It’s my buuuurffffdayyyy,” she said.

Her friend Katy Weaver, who also attended the party, shared another pic.

“Everyone had a great time,” a source told E! News. “It was a fun and relaxed and it was quite a spectacle. Nothing less than what you would expect from a party with Miley.”

Patrick is the eldest son of Arnold Schwarzenegger and Maria Shriver, who share four children. E! News learned about his and Miley’s relationship in early November. Several sources said they were “casually dating.”

Since then, Patrick and Miley have been spotted out together several times this month, including at a USC football game, where they packed on the PDA, and during several dates.

This is the most high-profile relationship for Miley since she and actor Liam Hemsworth, her co-star in the 2010 movie The Last Song, ended their engagement and broke up in September 2013.

“I have seen Miley with Liam and other boyfriends but honestly I have never seen her look as loved up as this,” an insider told E! News last week. “This is more than just a fling, they look like they are falling in love with one another.”

The 21-year-old is hoping the party will not only help others but showher critics that she has a “caring and sensitive” side to her personality.

The soiree will include a three course dinner with waiters on hand to make sure Miley’s guests don’t lift a finger.

“Most people only see the Miley who puts on a show,” an insider told the Star.

“But she’s really caring and sensitive and wants to make a difference to the lives of homeless people. She’s putting a lot of effort into this party, there’ll be waitresses to serve them.

“The whole thing will cost her around £6,000 but she feels that it’s the least she can do.”

Miley has worked closely with a homeless shelter in LA for the past couple of years and the cause means a lot to her. In August she invited Jesse Helt, a man she met at the shelter, as her date to the MTV music awards.

Jesse reduced the Wrecking Ball singer to tears when he went up on stage and collected her award.

“There will be fun and games after the food too, and Miley is bound to put on a little show for them to get the party started,” the source added.

Miley Cyrus has recorded a cover of Melanie Safka’s “Look What They’ve Done to My Song, Ma” for the Sundance Selects satire “Free the Nipple,” Variety has learned.

Lina Esco, 29, is making her directorial debut on the feature about female activists who challenge censorship laws by going topless in public. Esco, who is also an actress, met Cyrus on 2012’s “LOL,” and showed her an early cut of “Free the Nipple” over the summer. That’s when Cyrus agreed to put her own spin on the tune for the film’s closing credits.

Cyrus recorded the song last August in two takes. She’s performed “Look What They’ve Done to My Song, Ma” before, but this version—produced by Nick Littlemore and Peter Mayes—sounds different. “It’s more rock ‘n’ roll,” Esco says. “It’s very Johnny Cash. Her voice is so raw, and the song is so raw.”

Esco started a feminist movement when she coined the phrase “Free the Nipple” in 2013, which has since been championed by Lena Dunham, Liv Tyler and Rihanna. The campaign, which has attracted 122,000 Twitter followers, opposes laws in 37 states that make it illegal for women to show their breasts in public.

“This is about equality,” Esco says. “You can show beheadings on Facebook, but you can’t show breastfeeding. If you’re going to censor nudity and love, you should censor violence.”

She came up with the idea for the movie, and when she started sharing the phrase, it went viral online (this tweetfrom Cyrus helped).

The film, which cost just under $1 million, was shot in six weeks in New York, but Esco ran into problems when police wouldn’t allow her actresses to appear topless in the streets.

“I’m making a movie called ‘Free the Nipple,’ and I can’t show boobs,” Esco says. “I had to go and steal the shots. We went and mapped out all the locations, rehearsed with clothes on and did it all in one take.”

“Free the Nipple” opens in theaters and on VOD on Dec. 12.