#MidnightSky Out August 14!
— Miley Cyrus Official Site - MileyCyrus.com
— Official Merch - shop.mileycyrus.com
— Latest Release - SHE IS COMING
Follow us on Twitter @MileyCyrusBz & turn on notifications for all your Miley Cyrus updates! 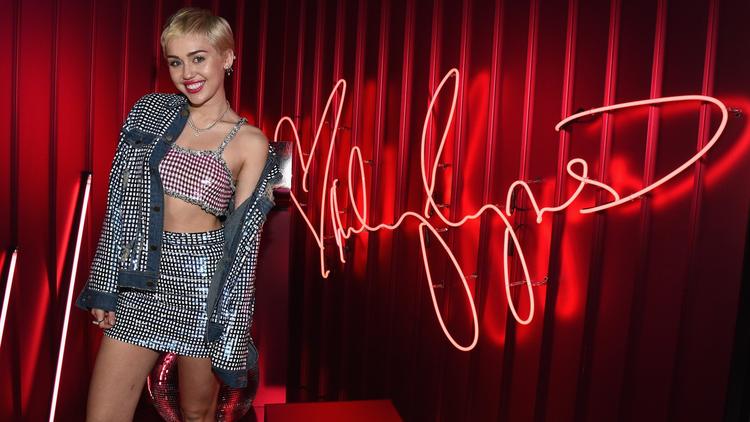 Miley Cyrus sank onto a stool and asked permission to kick off her MM6 Margiela wedge sandals and get comfortable. “Let it all hang out … not literally,” I said, as we settled in to chat about her new role as MAC Cosmetics’ Viva Glam girl for 2015, following in Rihanna’s footsteps as the celebrity face of the annual campaign that benefits the MAC AIDS fund. In the role, she not only is the face of the campaign, but also has a hand in creating this year’s Viva Glam products.

If a lot of my fans go out there and buy the lipsticks and that has something to do with seeing a cure for HIV-AIDS in our lifetime, that would be really cool. – Miley Cyrus

Given the 22-year-old’s predilection for provocation, it’s no surprise that the shades she selected for the first two products are shocking pinks: fuchsia Viva Glam Miley Cyrus lipstick ($16) and sparkly magenta Lipglass gloss ($15), which debuted at maccosmetics.com and in MAC stores this week.

With a disco ball propped next to her on a production studio stage, the songstress talked about the AIDS-HIV fight, the accessories she designed for designer Jeremy Scott’s spring fashion presentation, beauty and her personal style.

How are MAC Viva Glam and the HIV-AIDS cause a fit for you?

It is about not being afraid to speak up. This is a conversation that needs to be started, especially with my generation, because [HIV–AIDS] is not something that is hyper talked about. There used to be such hysteria around it and people didn’t know what was causing it or what to say. Now we have so much knowledge that it is time to have the discussion about how we can help those who are affected and talk about how to prevent it. I am around so many young girls and boys and really in front of the LGBT [Lesbian, Gay, Bisexual and Transgender] community and HIV is not stereotyped to one sexual preference. MAC is doing an amazing documentary that shares the actual stories of people like you or me with HIV who look completely healthy. Twenty percent of people affected don’t know it; this is something that we all have to protect ourselves from. If a lot of my fans go out there and buy the lipsticks and that has something to do with seeing a cure for HIV-AIDS in our lifetime, that would be really cool.

Tell us about the process of creating the hot pink color and what it conjures up for you.

I was like a mad scientist. I would go in my room and mix different paints with glitter. I wanted it to feel like a disco ball was crushed into hot pink liquid lava with a futuristic and cyber yet retro kind of vibe. I was really obsessed with the color. It was important to have something that could go mature or young and fun, because the spectrum of who is going to wear it is totally broad. The feel is important too. I was trying to explain to a guy how uncomfortable lipstick can be, how you can feel like you can’t drink anything or can’t talk or it will get all over. And I have big lips anyway. But this lipstick doesn’t move and doesn’t make you feel like you can’t move. During the day or at work, you can wear the lipstick and then, at night, get crazy with the gloss. And the gloss is fun for girls who can’t go as dramatic. The gloss is addicting; just a warning. More is more. You kind of can’t have too much of it.

Feeling confident…. I think [beauty is] remembering that there is only one you, so be yourself. We live in a time when there is a lot of judgment in the world, but women are getting there [in terms of] being as super-super-free as possible and every day people are coming more and more out of the box. But we have to keep working at it.

Did you wear more makeup during your “Hannah Montana” days?

I had someone doing my makeup every day for television. I think they want you to look a certain way, but they don’t take in the fact that you are 13 so you don’t need the same makeup that you would later in life. They forgot that I was a bee-bee. [laughs] But I was [also] really insecure with my skin then. I had bad skin, so I needed foundation and powder. I never wanted to wash my face because I didn’t want to see myself without the makeup. As I got older, I realized it was a vicious cycle. Once you take care of your skin and keep it clean, it is so much easier. I was about as much cake face as I could have when I was younger and now I try to avoid that. I love [my Viva Glam] lipstick because you can wear it with nothing on your skin except a little shimmer and it looks cool. I love glitter on my face and body at all times.

How would you describe your personal style?

All over the place. When I wake up, however I feel that day is reflected in what I wear. Today I’m wearing this brand called Ashish [a denim jacket, skirt and cropped top embellished with blue and white sequins in a gingham pattern]. It’s fun because it is all glitter, so it kind of goes along with the vibe of the lip gloss. I have a pink version too, so I can mix the pieces.

The Blonds designed the bodysuit you are wearing in the Viva Glam ad campaign, as well as some costumes for your “Bangerz” tour. How do you collaborate with your stylist, Simone Harouche, for projects like this?

The bodysuit in the campaign is actually vintage. The Blonds let us into their archives, which was really cool. They are very involved in the LGBT community [the line is designed by gay couple Phillipe and David Blond] so it made sense to have them be a part of this. In general, I usually draw what I want to wear and Simone will either find it or get it made, but it usually starts out with a little sketch of what I see.

Let’s talk your “Dirty Hippie” art collection, including the colorful jewelry and hair pieces made of collaged toys and souvenirs shown on the runway at Jeremy Scott’s spring fashion show in September. I hear the pieces won’t be replicated for sale; do you plan to sell the originals?

One day I’d like to, especially if I could do some crazy auction for charity. I want people to be able to have them, but I made them all myself, so I also want to teach girls to make them and open up that DIY side of creativity. They were shown at Jeremy Scott but it doesn’t have to be a designer thing.

Who are some of your favorite designers?

Jeremy Scott! I wanted to work with Jeremy since day one. He is so fun and all about pop culture; so much of his stuff is vintage-inspired so it doesn’t all look the same. Marc Jacobs too, because he is one of those guys who will wear a skirt to the Met Ball. I love it. And Tom Ford is amazing.

You recently defeated Ford in a bidding war for a Ryan McGinley nude print at the amfAR gala auction in L.A.

I had to do it because he was getting honored and I wanted to outbid the honoree, so that was pride. You see my competitiveness will come in handy with Viva Glam. I’m not going to stop.

Would you say that you both understand the power of being provocative?

Yes, I think he does especially in the way that he puts women in that light. Like Jeremy, he understands culture. And I loved what he was doing this year with all the nipple pasties, obviously, following a cool clubby thing.

You were clearly ahead on that trend.

Hey baby. Don’t ever forget it.